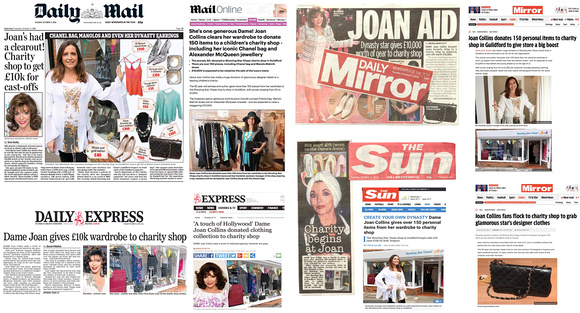 10/10/16 Guildford, Surrey.
Shooting Star Chase charity shop in Guildford has been given a huge donation by their Patron Dame Joan Collins. She has given over 150 personal items from her wardrobe for the shop to sell which has caused lots of interest from eager fans and fashion lovers.

It is expected that £10,000 will be raised by the sale for the charity who support babies to young people up to the age of 21. Prices range from just £5 to £1000.
Items for sale include an array of clothing, jewellery, hats, swimwear, designer labels and items that Dame Joan has not only worn, but designed herself under her clothing range `Jackie Palmer`.
The shop is running a silent auction for some of the most iconic items which include a Chanel handbag, a pair of Manolo Blahnik shoes, a Tiffany necklace, an Alexander McQueen bracelet, a signed copy of her book, a signed pair of LK Bennett shoes and a pair of earrings worn by Joan on the set of Dynasty.
Once the word got out about the items for sale people have been traveling some distance to get hold of some special items. One lady travelled from Dorset and spent £700. They even had a customer from Germany call up and spent £400 over the phone without seeing the items and had them posted.
Dame Joan Collins recently dropped by the charity’s Guildford hospice, Christopher’s. She met families supported by the children’s hospice charity, joining them for an early evening meal before cutting a birthday cake to celebrate the hospice’s 15th birthday.
Karen Sugarman, Director of Fundraising at Shooting Star Chase, said: “It was a pleasure to welcome Dame Joan to Christopher’s and such a thrill to see the delight on the families’ faces as they enjoyed a meal with a Hollywood superstar.
“Dame Joan has been a fantastic supporter of Shooting Star Chase for many years now and is always keen to show her support. Her latest donation to our shops has caused a great buzz and we’ve had enquires from fans all ov
Paul Jacobs/pictureexclusive.com
Powered by ZENFOLIO User Agreement
Cancel
Continue