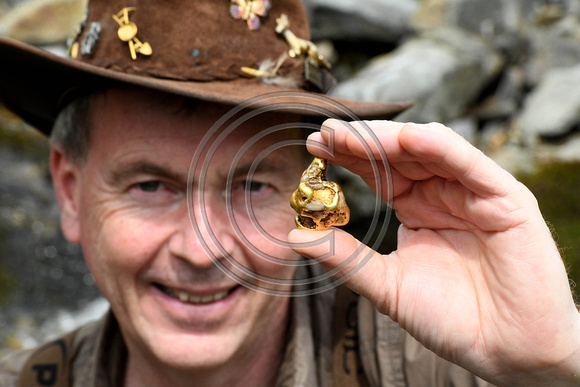 A GOLD hunter has had a stroke of luck after discovering BritainÕs largest ever nugget - which is the width of a golf ball.Ê The plucky explorer found the precious 85.7g [2.75 Troy ounces] lump while diving in a Scottish river and it is estimated to be worth upwards of £50,000. Named the Douglas Nugget, it is the biggest gold nugget to have been unearthed in British waters for 500 years.Ê
It was discovered two years ago by a British father but he has kept it a secret until now.Ê The man - in his 40s - wishes to remain anonymous due to the magnitude of his find. The nugget was discovered in a mystery river in Scotland and its exact whereabouts is being kept under wraps.Ê
Pictured is Gold expert Leon Kirk, from Gold Panning Supplies UK holding the nugget, with the finder of the ÔDouglas NuggetÕ wanting to remain anonymous due to its value worth upwards of £50,000.