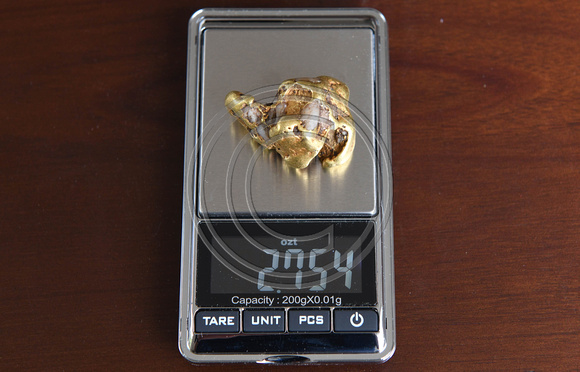 A GOLD hunter has had a stroke of luck after discovering BritainÕs largest ever nugget - which is the width of a golf ball.Ê The plucky explorer found the precious 85.7g [2.75 Troy ounces] lump while diving in a Scottish river and it is estimated to be worth upwards of £50,000. Named the Douglas Nugget, it is the biggest gold nugget to have been unearthed in British waters for 500 years.Ê
It was discovered two years ago by a British father but he has kept it a secret until now.Ê The man - in his 40s - wishes to remain anonymous due to the magnitude of his find. The nugget was discovered in a mystery river in Scotland and its exact whereabouts is being kept under wraps.Ê
The nugget is pictured on the scales, weighting 2.75 troy ounces - 85.7g